It's clear that my babies like my womb. Darby was forced out 11 days after her due date and as we approached the due date with #2, I figured the scenario wouldn't be much different this time around. On my February 19th due date, Doug and I went to the doctors office with a plan. Since it was my second pregnancy my doctor was much more willing to take measures and induce earlier than she would with Darby. I told her that I would like my membranes stripped that day (Thursday) and that if my body didn't respond by going into labor on its own in the usual 24-48 hrs then I wanted to schedule an induction for Monday. Luckily she agreed and went ahead and "aggressively stripped my membranes"...youch!! Unfortunately, that didn't do much other than leave me uncomfortable and antsy to get the show on the road. So, the induction was scheduled for 12am Tuesday morning, the 24th, meaning that if all went well, I should have a baby before noon! Well, we got to the hospital just before midnight on Monday and got to sit in the waiting room until 2:30am while we watched women in labor come in and get priority over lame ducks like me. Our doctor finally sent us to a hotel and said to come back at 9am. We got a few hours of sleep and then made our way back to the hospital with a new outlook and an adjusted timeframe of meeting our little peanut. When we got there, the waiting room was still full, even with a few of the women that I was sitting with until the wee hours of the morning...bad sign. My doctor came out, said it shouldn't be too long and then we sat, and sat, and sat. Every once in a while a nurse would come out and say that a room had just opened up and we were next and then a woman in labor would come through the doors and take the room. I cried every time it happened. It was so mentally exhausting to psyche myself up for labor and then be told to wait again. This went on until 1pm when I was finally taken into a room.

When my doctor came in to go over a plan of action I immediately told her to accelerate everything because I was going to have a baby on Tuesday. So, she put in 2 foley balloons and cranked the pitocin like water and I went from 2cm dilated to 5.5cm in 1.5 hours...wahoo!! With Darby, that process took 8 hours. From there we kept the pitocin going, but it had to be turned down because the doctor had to do an emergency c-section and couldn't risk me going into labor while she was in there.

After slowly laboring for quite a few hours, my doctor came into check me again around 8:45pm and I was dilated to 7cm and said that she would come back in a few hours to check me again...whaaaa?! I felt so defeated and was sure that I wasn't in fact going to have a baby on Tuesday. So, Doug decided that he was going to go grab a slice of pizza (you know, watching labor for hourrrrrrrs is so hard and taxing). He left and I was in the room by myself and all of a sudden I started having some serious contractions and (excuse me if this is TMI but it's the miracle of life we're talking about and it's messy:) even more serious butt pain. I texted Doug to get back ASAP as I thought things were starting to happen. He got back at 9:13, ran and grabbed a nurse, who grabbed the doctor and shit got real. Everyone was scrambling around trying to get gloves on and prep the room while I was desperately holding my butt hoping the baby wouldn't come out yet. Once prepped and semi-ready, I gave 3 of the longest, most dramatic pushes of my life and at 9:45pm, out came the peanut! I would have 15 kids just to have that feeling of total exhaustion and total elation balled up into one crazy moment. Doug announced that it was a BOY and then cut the cord and laid him on me!!


We spent the next few hours hanging in the delivery room, getting to know the little guy and then luck was totally on our side when the nurses wheeled me up to a private room...which is very hard to come by in NYC.

My dad brought Darby in the next morning and she got to meet her little brother and couldn't have been more proud and sweet about it. 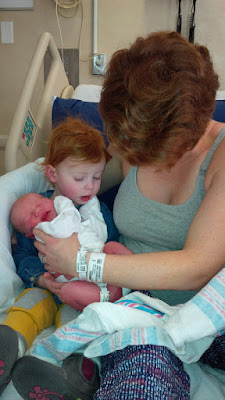 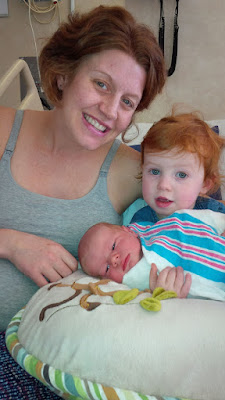 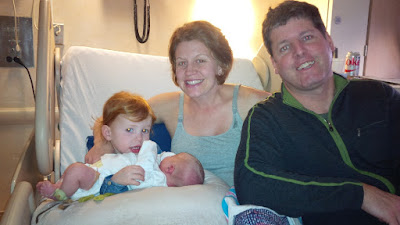 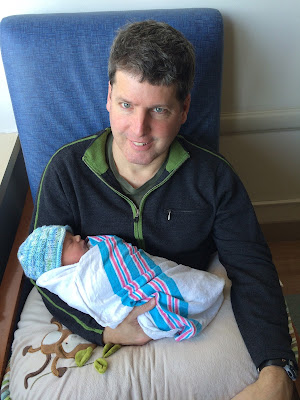 I spent a couple of days in the hospital and then basically hit the ground running once we got home. Life with two is certainly a far cry from the early, slow days with only one. Our family of 3 is now the perfect little foursome and feels very complete with our little buddy Calder. 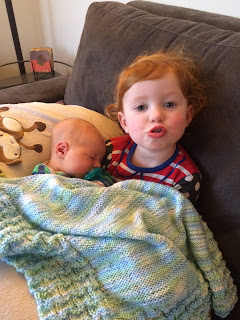 Posted by KelliJamison at 1:19 PM