If I could start everyday with a trail run followed by a dip in the ocean to cool off and then a breakfast buffet with fresh tropical fruit of every variety, I would be in paradise. Oh wait, that's how everyday of our vacation in St. John started off. After stuffing our faces at breakfast, we would put on our suits and spend a few hours snorkeling around. The best part about being pregnant and being on the beach in a bikini, it doesn't matter how much you eat, you still look chubby! After breakfast I looked about 6 months pregnant and then after swimming around for a few hours, I'd be back to 5 months. Another piece of french toast? Bring it on!


We stayed at Caneel Bay, which is a "resort" in the middle of the Virgin Islands National Park. Laurance Rockefeller owned the land, started a hotel that was designed to blend into the landscape and then donated the land and the hotel to the Government to create Virgin Islands National Park. Even the lighting on the pathways was taken into account and is very soft, so that you can still see the stars at night. There are hiking trails in almost any direction you go and there's a private beach for every 4 or so cottages, so it's really quiet. There were deer (and little bitty baby deer, still nursing and only 2 ft. tall!!) all over the grounds as well as donkeys, mongoose and lizards.

Most days I would be so wiped out by 3 or 4 that I'd have to take an hour nap so I could make it through dinner. Doug tends to forget that I've got a little person sucking on my energy supply, so we had a lot of playtime until I put my foot down for nap time!


One day we took a sailboat ride for a few hours and it was nice to just put our feet up and take in the views.


Another day we took a taxi to Cinnamon Bay for some snorkeling, paddleboarding and reminiscing action. Doug's family used to go to St. John's and camp for 2 weeks at the campground, so we went to check out his old stomping grounds. It poured rain on us, but we were in our swimsuits hanging out in the ocean, so we didn't care a lick.

Oh, and remember how I said I was going to take some awkward awesome maternity photos on the beach, well we only managed one, and I look more "special" than anything else. 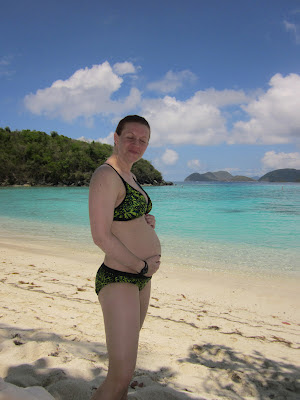 All in all, we had a fabulous vacation. Since it's a direct flight from NYC to St. Thomas and then a short ferry to the resort, I have a feeling we'll be heading back, and hopefully soon!

Posted by KelliJamison at 12:54 PM