Doug had to go to Copenhagen for work for a few days and then he had to be in Switzerland on a Monday, so instead of leaving him alone for a weekend in Europe, I decided to hop across the big pond and join him! I've heard a lot of great things about the city, the cleanliness, the bikes, the friendly people...and it was definitely all that. Unfortunately, it wasn't my favorite European city, but I still really enjoyed it and was glad I got to go.

The flight over was not a lot of fun. It left in the evening and got to Copenhagen around 9am their time. I didn't sleep a wink because I had to use the bathroom no fewer than 10 times and when I was sitting down it hurt my tailbone a lot, so I ended up hanging out in the back with the flight attendants and my iPad for most of the flight. By the time I got in, I was a zombie. Unfortunately, our hotel room wasn't ready and Doug was in meetings for the day, so I dropped by bag off with the hotel and wandered around the city in a total daze. When I found this beautiful park, I had no shame trying to take a nap on the grass with the other bums. 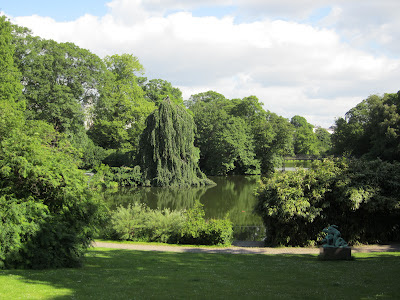 The nap didn't last at all because it's really hard getting comfortable laying on a grassy slope with a big belly. I wandered for another couple of hours and then went back to my hotel with a look of despair and some tears ready and waiting and they magically had our room ready. After a couple hour nap, I met up with Doug and a colleague of his to wander some more and then head out to an awesome Vietnamese restaurant for dinner.

On Saturday we walked all over the city taking in the sites, checking out a couple of museums and of course some fun Danish jewelry stores:) The craziest thing about all the stores here is that there are always baby carriages parked outside the stores (because they're usually pretty small) with the babies still in the carriage!! At first I figured that the parents just parked the stroller outside and took the baby in with them, but nope, they just left them outside until they were finished shopping...it was hilarious! The funny thing is that I didn't hear one baby crying the entire trip and I'm not exaggerating. Perhaps the Danes with their easy going lifestyles are onto something. Or maybe the kids are getting more than milk in their bottles...who knows.

Sunday was by far my favorite day. We got up early and took a train about an hour north of the city to go to the Louisiana Museum of Modern Art...funny name, awesome place. The museum has a vast array of modern works of art from Warhol to Picasso to Guston inside and an equally if not better collection of sculptures outside. The building is a piece of art itself, chock full of beautiful Danish design around every corner. The walls that aren't covered in art are full length windows that look out onto the beautiful grounds that sit right on the shores of the Oresund Straight (it connects the Baltic Sea, the North Sea and the Atlantic Ocean). Here are a few pictures from our wanders in the museum and sculpture park.

I flew back to NYC on Monday morning and left Doug to do some business in Switzerland. The flight home was much better because I ponied up and upgraded to an economy seat. Good trip...it might just be our last European foray before Baby J is with us!
Posted by KelliJamison at 3:23 PM