When Doug turned 40 in December, I surprised him with a dinner at Zoom in Park City with 4 of his best friends. We had a great evening, catching up, telling stories and toasting Doug on his 40 years of life. I even picked up the tab…Happy Birthday Doug.

This weekend, I got completely upstaged. I guess I should have known this was going to happen when we got the evite a year ago, but honestly, I had forgotten until a couple of weeks ago when follow up evites starting hitting my inbox.

The invite was for a surprise 40th birthday party for one of Doug’s friends from college, who was a swimmer all four years while Doug was a diver. The invite told us to be at the Metropolitan Museum of Art in the Trustee’s Dining Room at 6pm dressed in summer cocktail attire…ruh roh…this is one of those parties. So, I convinced Doug I needed a new fancy schmancy dress and we headed to Saks on Saturday morning.

Here’s the little number I settled on…Doug picked it out!

Once we arrived all gussied up, we were met by photographers taking our pictures and a full open bar until the guest of honor showed up. The birthday boy and planner extraordinaire wife showed up around 6:15 to a whooping surprise and some mingling for a bit (funny thing is, the dress that wifey showed up in is one I had tried on only a few hours ago at Saks…don’t think that would’ve been too cool). After a bit, we were seated at our tables that had place cards for each of us. On the back of Doug’s place card had the exact time he was supposed to give a toast, 9:15pm. Also on the table were hard cover books with about 75 pages of pictures and stories of bday boy. 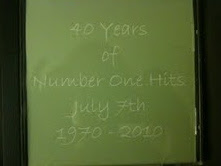 Oh, and this was the centerpiece

As we made our way through the 5 course dinner, people stood up to toast every 10-12min. as instructed. The stories were great, the company was fabulous and the food was amazing. When we finished up around 10:30pm, we were escorted through the now closed Met (think Night At The Museum) to a line of waiting car services to shuttle us to our next stop, the five star Surrey Hotel, where wifey had reserved the full bar and had free flowing champagne. Doug and I bailed around 1am, but were told on our way out that she had arranged a full brunch at 12pm the next day, also at the Surrey. What?!! Two days of this? We didn’t end up going to the brunch, so I’m not sure what that all entailed, but just from what we experienced on Saturday night, I’m pretty sure wifey spent more on that party than we did on our whole wedding.

Doug’s bday party seemed pretty lame in comparison, but too bad…I would have had to rob a bank, or steal one of those paintings from the Met, to afford something like that. Maybe for his 50th…

Posted by KelliJamison at 9:38 PM